Upstart Holdings, Inc. operates a cloud- based artificial intelligence (AI) lending platform. The company's platform aggregates consumer demand for loans and connects it to its network of the company's AI- enabled bank partners. Its platform connects consumers, banks, and institutional investors through a shared AI lending platform. Upstart Holdings, Inc. was incorporated in 2012 and is headquartered in San Mateo, California.

Their stock price dropped 20% on earnings day. And it's moving down another 20% since then. But if you had a chance to take a look at the earnings report you'll realize the numbers are just good but not great. 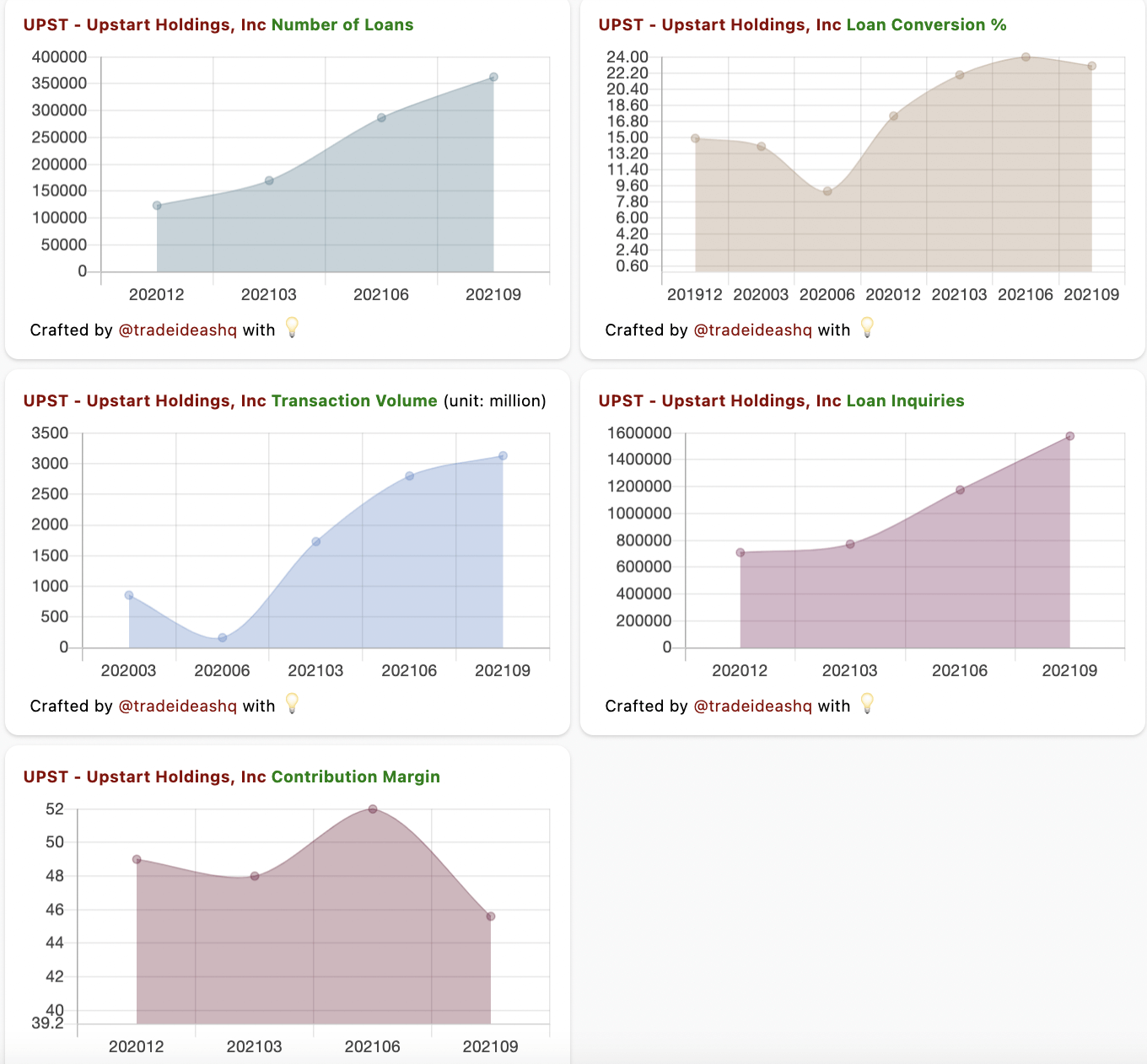 You can also see q2 numbers are also just OK. The revenue growth qoq is only 18% but not the 50% ish we hoped for in the previous 3 quarters.

Also there's a thing about Upstart's AI business model, that is, you need to spend time to collect data, train your AI model, backtest and validate... etc and that's the easy part. The hardest part is still when you have a working AI model how do you convince people that your model works? So, even when we know they have new businesses with long runways like car loans and stuff it would still take tremendous amount of work to convince people that your stuff works. And that's very hard.

Also, what happens if Intuit or Credit Karma hires their data engineers and tries to do what Upstart is doing for them later? Currently, Upstart has 44% ish revenue that is coming from Credit Karma. And it would be catastrophic if Credit Karma decides to walk away for some reason. But is it possible for Credit Karma to do that to them? I think the answer is yes and it could be profitable for Credit Karma since for Credit Karma you either spend money hiring engineers or spend money on Upstart loan services. Either way, you're spending money but one is investing in your company's future and the other one is an expenditure, and for both approaches you won't have credit risk with you anyways. Those are real considerations.

It's still a great company at the end of the day when they promise to disrupt FICO and make it easier for ppl to borrow money. But I'd be sitting on the sidelines and stay away from it for the time being.

TL:DR; great company. impressive earnings call. Went up 22.97% on Friday is an indication that people want it. It might be a good opportunity to get in if there are pullbacks in the next while.

Upstart Holdings, Inc. is a lending platform leveraging AI on consumer data to help banks lend out money with greater returns and lower risks. The idea is they can look through your bank statements, education transcripts, employment status and peek into your cashflows so that they know a lot about you and how risky it is to lend money to you. So when banks use their service they're able to lend out cheaper money to their consumers but with a much lower default rates.

Guidance for the year was raised from $500 million to $600 million.

For the guidance part: That, to me, is literally saying they can get revenue whenever they want or maybe they have some sort of product market fit and banks does have a huge demand for their service. For a company growing at around 100% a year with a forward p/e ratio of around 100 maybe there's a hidden gym here. $UPST

So their concept is a bit like ant of Alibaba or $lu where they use AI to know who to lend money to with low risks.

Also they have a surprisingly low net loss considering losing a lot of money is common among modern tech companies. Currently they're growing at 45% a year and this might even go up given the low rates environment we are in.